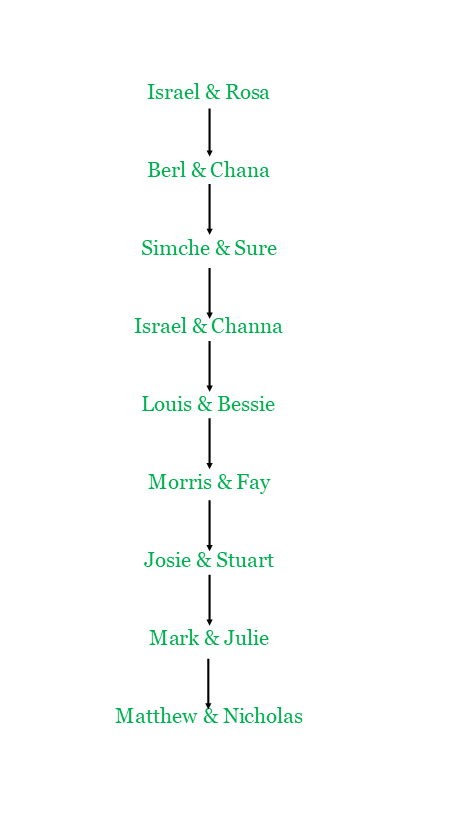 I wondered about Esther Holdengraber for a long time. ¶ I first found her name when I did a search through Newspapers.com. She appears there in a handful of articles that make clear she was a respected anesthetist in small, upstate Olean, New York.

She shows up as well in the Jewish Online Worldwide Burial Registry and in the strange website Billiongraves.com. There, we learn that she died in 1979, and that she is buried next to a Bertha Holdengraber who died in 1957.

Since Esther was born in 1896 and Bertha in 1872, it seems clear they are daughter and mother.

With that, something in the image haunted me.

I grew up in a small town myself, and I know how such communities can work. Interesting people find their ways to unlikely places and, as the handful of newspaper references suggest, Esther made herself a valued part of her home.

She seems to have lived in Olean for at least 35 years, and one brief notice (that you can find in the archived news at fultonhistory.com) suggests that she took a job at a New York City hospital only to return to Olean soon after.

She must have seemed a fixture in that town where she spent the second half of her life, and I wonder how often she told the story of where she’d come from.

Try as might, though, I could not figure out how Esther and Bertha were related to the larger Holdengraber family. I found obituaries for each of them, and I learned that Bertha’s maiden name was Ebner. (That clue should have been enough, but some things are clear only in retrospect.)

I learned as well that they came from Romania/Austria; Bertha’s obituary mentions both without specifics. That confirmed that they must have been cousins of some degree, but, without a name for Bertha’s husband, I couldn’t go any further.

I have a list of more than 200 “orphan Holdengrabers,” names that I have some information on but cannot connect to the larger tree. As I solved several of them – at this writing I have figured out roughly a third – I kept coming back to Esther and Bertha.

They seemed like people I would have enjoyed knowing. And, connected to their small town as they must have been, they seemed a little lonely, just the two of them, in a place so far from where the larger family story began.

I had discovered the Arolsen Archives before, but I didn’t dive into them until recently. I searched there for Holdengraber and found more than a dozen names, most of which I already knew.

I already “knew” Friederike Holdengraber. She was born in Suceava in 1902, a daughter of Adolph and Bella (née Ebner). Her grandparents, Marcus and Sara (née Merdler) are one of the two most prominent third-generation couples I can’t place on the larger tree, but Marcus was clearly a cousin or sibling of several of the Holdengrabers we can connect.

The Arolsen Archives has a scan of a file card on Friederike that records some of the bare facts of her experience during World War II.

I copied the scan to a remarkable service at JewishGen, their Viewmate translation request, and Jonathan Michael Wien got back to me within a few hours.

What I’d thought was German turned out to be Dutch, something Jonathan suggested I should have known from the heading “den Haag,” The Hague. The card had many notations from different times and in different typescripts and handwriting, but Jonathan translated the two longest and most impenetrable sentences.

One reads, “Repatriated to Romania according to [illegible name] 24 August 1943.”

Before. The “Bella” I had as married to Adolph was born an Ebner just like Bertha.

I realized that Bertha and Bella must be one and the same.

And all of that meant that Esther was the older sister of Friederike, and the daughter of Adolph and Bertha/Bella.

I know that doesn’t make any real difference in the world. If I ever drive past Olean and can spare a moment, I’d like to place a rock on Esther and Bertha’s graves, but that’s the extent of any connection in the real world.

And, with neither Esther nor Friederike seeming to have married, I gather they have no children to reach out to.

Still, there’s a strange satisfaction in making the connection. I don’t know what happened to Friederike after she was “repatriated,” and perhaps there is a story there.

But I do know that Esther, in the face of some of the worst of the 20th Century, made her way to a small town where she carved out what seems a good life for herself and her mother.

If we’re trying to tell the story of what has happened over the last 250 years to the descendants of Berl and Channe Holdengraber, I’m glad to have Esther as part of it.