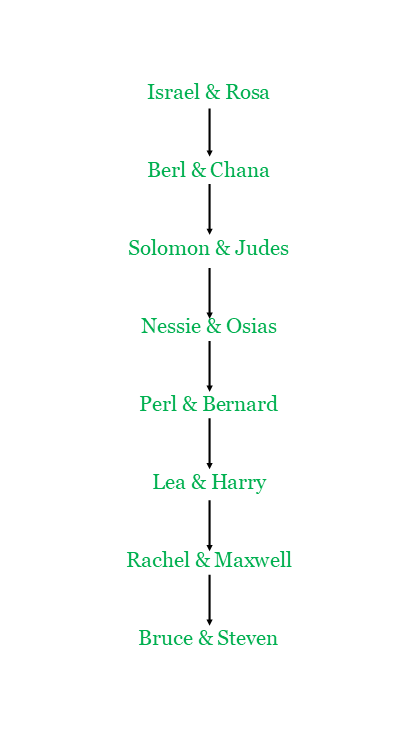 When I first started trying to put the JewishGen records into order, I thought for a moment I’d stumbled on a 180-year-old mistake. The name Rosa Holdengraber kept coming up in birth records from Câmpulung, but there were two different married names attached to it.

One Rosa Holdengraber married Schmiel Ostfeld. They had twelve children that we know of, with the first, Freida, born in 1850, and the last, Chaje 1875. From that, I guess she was born roughly around 1828.

As it happens, Rosa and Schmiel have at least two dedicated genealogists among their descendants, Merle Kastner and Anny Schaefer, so we know a great deal about that branch of the family.

The other married Shulem Rosner. They had seven children, starting with Schifra in 1857, so, by the same logic, I figure she was born around 1835.

One of Rosa and Shulem’s descendants is Maja Rath, and she too has done a lot to trace that part of the family.

So, there was no mistake, and we have several generations to prove it. There were two women born with the same name within a handful of years of each other in the late 1820s and middle 1830s.

At that point, when I was still speculating about how the third-generation of Holdengrabers were related to each other, those respective dates seemed an important clue.

I began with the assumption that the two Rosas could not have been siblings. After all, parents would not give two living children the same name.

The most obvious explanation seemed that they were first cousins. That is, I assumed (incorrectly, I now believe, but more on that in a moment) their fathers were brothers.

What’s more, given how early those dates were – given as well that the first Holdengraber had to assume the name in the 1880s or 1890s – it seemed likely that their fathers were also sons of that first shared ancestor.

It seemed, in other words, that the fact of two Rosas set up a clear distinction between two of the earliest lines in the family.

I could not get any further in untangling how the two Rosas were connected to each other until I took a look at what the spreadsheet of the house numbers revealed.

In the case of Rosa Holdengraber Rosner, the answer seemed fairly straightforward. While the family moved around to four or five different houses over the course of the records we have for them, they were living at number 829 for the birth of their daughter Schifra in 1857.

Sara, we know from the birth records for her children Naftali and Perla, was the wife of Simche Holdengraber, whom other work with the spreadsheet revealed as my own great-great-great-grandfather.

In other words, Rosa Rosner seems almost certainly to have been a third-generation Holdengraber, one who happened as well to be the sister of my great-great-grandfather Israel.

When I checked the records for Rosa Holdengraber Ostfeld, though, things got confusing.

Between 1862 and 1875, they had at least four children while living in house number 887. There are no other records of family connected to that house, and it’s easy to imagine they needed a lot of space for their own eventual dozen children.

Before that, though, they have their first two children, Freida (1850) and Moses Meshulem (1857), in number 343. That house had a long-standing connection to the same Simche and Sara who were Rosa Rosner’s parents, though. In fact, I have 18 records of family members that cite it between 1843 and 1875.

And finally, to confuse things even more, they were living in the same house as Simche’s oldest child, Israel (my great-great-grandfather) when each family gave birth at number 857 in 1858 and 1859.

In other words, both Rosas seem to have lived in the same houses on multiple occasions. That suggested again the possibility that they were siblings, but I wasn’t ready to go with that theory quite yet.

The breakthrough came when I looked away from the records for a time. Instead of thinking about the two Rosas, I tried to make sense of what was happening at that particular house number 343, the one where members of the family lived for perhaps as long as 40 years.

It became increasingly clear to me that the oldest couple associated with that address were Berl and Channe. Simche, I gradually came to see, must have been their son. (Please see post ??? for a longer description of that conclusion.) And I gathered that, over time, Simche and Sara emerged as the heads of the household as Berl and Channe aged.

Still, there could have been a period of overlap, a time during which Berl and Channe were giving birth to their youngest children while Simche and Sara were delivering their first.

That meant there were at least two generations of couples in the same house potentially giving birth to children at the same time. It meant that Rosa Ostfeld could have been an aunt to Rosa Rosner.

There are problems with that theory. Above all, Channe would have been around 50 when she gave birth to Rosa (later) Ostfeld.

I acknowledge it is perhaps equally likely that Rosa was the daughter of another of Berl and Channe’s older sons. However, if we rule out Simche – and we can also rule out Solomon since he moved to Suceava for his family – the other possibilities we know of, Isaac and Josel, seem too young to be her father.

Still, I think the theory of the two Rosas as aunt and niece fits the facts we have a little better. It explains why she would have lived with both Berl, her presumed father, and Simche, her presumed older brother.

It’s possible, of course, that – if Rosa were the daughter of Isaac, Josel, or an unknown older child of Berl and Channe – she would have lived with her cousins or uncles, but that strikes me as a slightly less likely scenario.

I doubt any further records will turn up that clarify this, but it’s possible that we might someday run autosomal DNA tests on those of us who are living descendants. Given the distance, it will take at least a dozen of us to try the experiment, but I’d be interested to see what all of that would tell us.