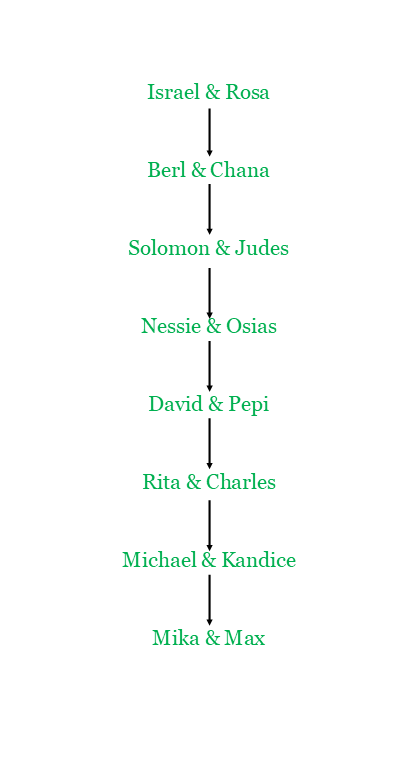 I lost count a long time ago of the number of times I have revisited the records at JewishGen. It’s been months of pandemic-time searching through the same material, and I continue to call up things I have checked and re-checked. In some cases, I remember the specific notations of a few without even having to re-read them.

Still, every so often I find something new, something I somehow missed the first time around.

At this point, that’s usually because of a quirk, some element of the original record that throws things off.

A few weeks ago, I stumbled across a record for Freida Astfeld. ¶ That wouldn’t have meant anything to me except that I noted her parents were Shmiel and Rosa from Câmpulung.

I paused and then it hit me: Schmiel and Rosa Ostfeld were names I knew, with Rosa being one of the two Rosa Holdengrabers born in the middle 1820s to the early 1830s. When I checked the tree, I realized I didn’t have Freida on it, which meant I’d uncovered a late third-generation or early fourth-generation relative.

I felt pretty good about myself for that catch since, at least according to what I had from the three or four others who’d looked through the same materials, I was the first to find that record.

Today, as I was going back to check on my records about Freida as part of writing up my larger findings on Rosa Ostfeld and Rosa Rosner, I ran the search in a slightly different way. I no longer remember what different combination I entered that revealed Freida as an Astfeld, but when I searched directly for Freida Ostfeld, I got a series of records for her as a mother.

According to the birth records for Itzig, Chaje, Abraham Beer, Israel, and Channe Abraham, Freida married Kalman Abraham. They legalized that marriage in 1891, but they were clearly together much earlier than that since Itzig was born in 1869.

Later, when I searched for Abrahams, I found a sixth child, their oldest, Taube. In her record, though, Freida’s maiden name is spelled Ausfeld, which meant it was another record that “hid” in a first pass of the materials.

And then, finally, I found still two more of their children, twins Gittel and Pessie. Those records don’t seem to have come up on my earlier searches because, while they have Kalman as the father and “Ostfeld” as the maiden name of the mother, they don’t have Freida listed for the mother’s name.

All of this is a rabbit hole, and it’s easy to get pulled ever further in. When I pushed even further into the marriage records for Abrahams from the Bukovina region, I found one for Itzig. In 1894, he married Koine Zentner in Suceava.

All told, the accident of stumbling on that alternative spelling of Ostfeld as Astfeld, and then the second happenstance of my checking that record through a different approach, gave me an additional eleven names we hadn’t had.

And the work of it all happened from a computer.

There’s even more, though, and, while I’ve had similar experiences many times in recent months, it seems a good example of the way this process works.

For starters, the first two of Kalman and Freida Abraham’s children, Taube (1868) and Itzig (1869), are born in Câmpulung. The next six, though, are born in Iacobeni, a community roughly 20 miles away.

It’s hard to trace all the individual instances in which one part of the family moved from one town to another, but my sense is that the process picked up around this time. That is, the original family centers in Câmpulung and Suceava began to break up something like 70 years after Berl and Channe first arrived, and it was generally their great-grandchildren who made such moves.

I am fairly certain, for instance, that my own grandmother’s family moved from Câmpulung to Gura Humora sometime in the 1870s.

Given that Itzig himself seems to have moved to Suceava from Iacobeni, it’s an early and clear example of the ways some of these people did move from place to place.

Finally, there are the loose threads that a find like this can leave. ¶ In the record for Channe Abraham, there is a notation that she renounced her citizenship in the Romanian People’s Republic in 1961 when she would have been 78. Frustratingly, that’s all there is. We don’t know where she was living at the time, and we don’t know whether she had taken a married name. She’s in some records somewhere, but it might take another accident to find the next steps in uncovering her story.

It’s likely as well that Itzig and Koine had children. Given her unusual name, it might have been easy to check. I did manage to locate her birth record – which confirmed that she was eight years older than Itzig – and that gave me the names of her parents as well.

Still, it looks like a project for another time to trace whether they had any descendants and then to see if there’s any more information on Channe.