Sometime in the 1790s, my great-great-great-great-grandparents walked into history.  ¶Around the time George Washington stepped aside for John Adams, they moved south from German-speaking Galicia into the Bukovina region. They stopped in the shtetl of Câmpulung Moldovenesc in modern-day Suceava County, Romania, about 50 miles south of the border with Ukraine.

I don’t think they went all that far, but the 50-100 miles put them in a new jurisdiction. The Habsburg Austrian Empire had only just wrested Bukovina from centuries of Ottoman control. Our ancestors likely saw opportunity, as German-speakers themselves, to take part in the new industry that the shifting empirical power promised.

They don’t seem to have owned land, nor does it seem they acquired taverns, mills, or shops – at least not for a couple generations. Instead, they seem to have found roles, at least early, as brokers helping to make possible the trade that suddenly looked more to Vienna than to Constantinople.

We know only one thing for certain: when the Empire required all its inhabitants, even its Jews, to take on surnames, they determined to call themselves Holdengraber.

As part of their journey, they left behind the last of the Jewish Middle Ages, becoming quasi-citizens rather than nameless and invisible members of a tribe outside the state.

Even if records existed from 17th and 18th Century Galician congregations forced to reinvent themselves every several decades, even if secular governments had been concerned enough with segregated Jewish populations to record them in individual detail, they wouldn’t tell us much beyond a generation or two.

Earlier official names in most of the Yiddish-speaking world followed a one-generation patronymic. Joseph was a son of Isaac, not a Kraus. There would have been dozens, or even hundreds, of Israels sons of Jacobs in the community where our ancestors were born. Without the technology of family names, they have disappeared into a collective, communal history.

It took an act of self-assertion, an 18th Century declaration of hinenei, to become someone distinguishable from that collective, someone declaring a “here I am” so that not just the government, but us, their many and distant children, could know them.

The name attracts attention like a too-bright shade of lipstick, like a jaunty hat a size too large.

An 1849 birth record for one of the handful in Câmpulung with the first name Israel, butchers the spelling as “Holdi-ngraber” as if the clerk paused mid-writing to make sure he’d heard the name correctly.

A 1918 newspaper note cautioned women travelers that the ticket agent in Detroit was named Mr. Holdengraber, as in “Hold and grab her,” a mild, ribald joke that wire services carried across the country.

A 1971 humor columnist noted it as a prime candidate for the fictional “Society for the Encouragement and Preservation of Picturesque Names.”

And my great-grandfather, the last male in my line to have it, seemed to make a habit of shortening it to Holden, no doubt for ease of signing forms and dealing with officials, and then, in what I like to think of as periodic defiance, deciding to unfurl it again in all its distinctive and dubious Holdengraberian glory.

A quarter of a millennium later, it’s difficult to determine what our ancestors intended the name to mean.

If you split it Holden//graber, with “graber” the German for digger, it suggests “gravedigger.” Instead, if you see it as Hold//engraber, it suggests an “engraver,” perhaps a carver of the headstones that remain a distinctive feature of the region One of the specialized reference works on the derivation of Jewish names suggests translating it as “miner of deads [sic], rubbish” which hardly answers the question. Another declares it means “fair tombs,” which makes linguistic sense but still doesn’t clarify what it originally meant. A third ignores it altogether, not including it in its “Dictionary of Selected Jewish Names.” And the German professor I consulted threw up her hands in uncertainty.

Our ancestors’ friends and fellow travelers adopted generally more conventional names like Fishler, Kelner, Guttman, or Furhmann, names that, while musical and sometimes striking, don’t stand out in the same way – and, more significantly, don’t leave the same historical trace.

Their children sometimes married the children of those families – and we are all descended in our separate ways from them as well – but the descendants of those more common surnames blur together as that small community flourished, spread, encountered others with similar names from other places, and took part in the turmoil of 20th Century Europe.

Holdengraber runs through the birth, death, and marriage records of the region and eventually world, jumping out like a dash of color everywhere it appears. It’s so unusual, so ungainly, that it leaves a Kilroy-was-here-style graffito throughout the history of Romanian, and, later, world-wide, Jewry.

It’s a traceable isotope, evidence of where branches of that original nuclear family, now ten generations removed, settled, then moved and then moved again.

Those first Holdengrabers were born closer to the Spanish Inquisition than to today. Some of their tenth-generation forebears must certainly have been dispersed in that catastrophe, moving Eastward generation by generation as the rising powers of Western Europe discovered a sense of national identity that depended on Jews as an Other against which to define itself.

We know that much only from collective Jewish story, from history as a tectonic force. That changed when our ancestors and their new neighbors assumed surnames and stepped out of a Jewish world mostly invisible to secular authorities.

Suddenly, under the demands of empire, they stood as individuals in legal and historical fashion. The nations forming at the dawn of the Age of Revolutions wanted to tax and conscript them, wanted them to be, perhaps for the first time in history, citizens obligated to the state.

But the quirkiness of that Holdengraber name distinguished them further than most. The name is rare enough and its earliest citations are so geographically clustered, that it’s almost certain that only one family adopted it.

The technical term is “monogenetic surname,” and the implication is clear: any of us descended from someone with the name comes from that same original family.

The Katzes, Friedmans, and Goldsteins of the same time chose names that identified them to the state, but only for a couple generations. Because of the common nature of those names, history has left their descendants largely indistinguishable from one another. Hundreds or more took the name Kaufman, German for merchant or storekeeper, so the thousands of contemporary Kaufmans and Kaufman descendants are rarely related to each other.

In contrast, our ancestors chose such an odd name for themselves, and by extension for their descendants of at least the next few generations, that we can see we are all family even if at a sometimes untraceable distance. For purposes of genealogy, we have the equivalent of the bands a scientist might put on a migratory bird’s leg.

When our ancestors took on the name Holdengraber as part of that trek along the fringes of 18th Century empire, they walked into a quarter millenium’s worth of family history that we can – with a lot of digging – still find a way to tell.

Map of the Hasburg Empire 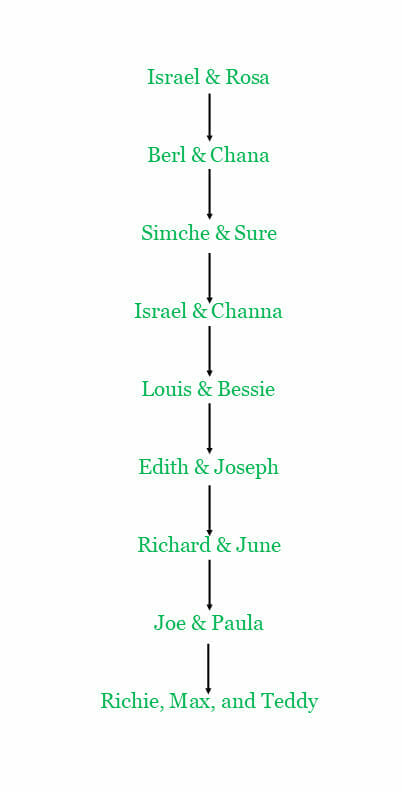 2 thoughts on “Walking Into History”