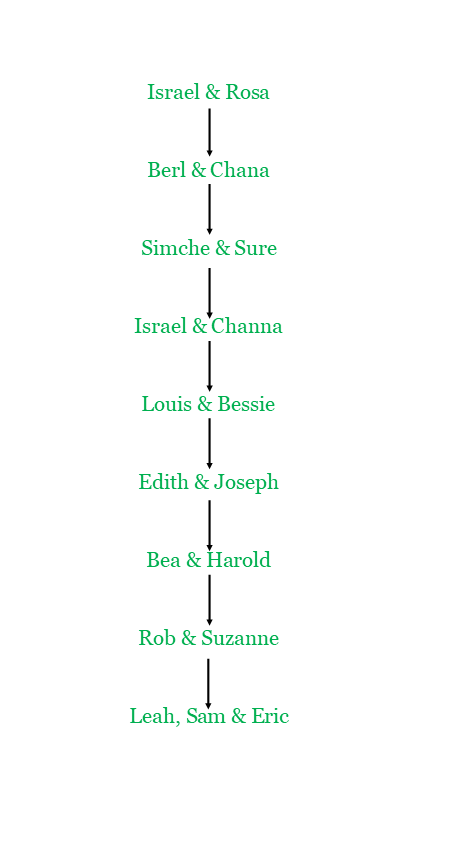 Most breakthroughs in family history come incrementally. The fuller the tree becomes, the easier it is to add some new name to it. When I found my way to a cache of on-line, indexed Jewish newspapers from 19th Century Romania, for instance, I managed to fill in details around a handful of names I already had, discovering the Zionist work of Isak, Simon, and my grandmother’s uncle and cousins, Haym Solomon, Leon, and Minna.

Others come when a single clue reveals a missing link, such as the record from the Austrian genealogy site genteam.au reporting that Judah Leib Holdengraber changed his name to Leo, allowing us to connect him to his son Kurt and grandson Paul who’d known him only by that name.

A few months ago, though, I had a paradigm shifting breakthrough, one that opened up so many immediate and eventual discoveries that I now feel I can account for almost every Holdengraber we know from the first four or five generations.

When I first started working with the JewishGen records, I didn’t know what to do with the “house numbers” recorded in many of the birth and death records. They seemed like background noise, details the officials wrote down but that told us nothing today.

And, for the first couple years I fished through JewishGen, that was largely true. It simply didn’t mean anything to me that Ides Holdengraber died in house number 482 in Suceava at 70 years of age on August 9, 1873.

As the tree grew fuller, though, and as I came to know about each individual, that started to change.

Ides, to take one prominent example, is generally recorded as Judes. She’s listed in many of the early records, and, with her husband Schloime (aka Solomon ha-Cohen), is a parent or grandparent of more than 50 people born before the 1870s.

In other words, we know, from the straightforward work of indexing all the original JewishGen records, a great deal about her and her family.

So, when I created a spreadsheet that contained all the house numbers, it made sense that her immediate family – people we knew to be her children – would be connected to the same house number 482.

To take the most obvious example, we see in the birth record of Judes and Solomon’s daughter Frieda that she was born on May 3, 1848 in number 482.

It doesn’t end there, however.

Freida, we learn, married Feibel Thaler in 1882, probably legalizing an existing marriage since each was already well over 30.

When I ran the spreadsheet, I found that Freida and Feibel had four children between 1877 and 1882 all while living in house number 482.

It made sense, of course. Even today we see three generations of a family living in the same house.

Still, glimpsing it in the records suggested new possibilities. Incomplete as the house numbers might be – they appear in only about half the birth and death records and in none of the marriage records – they paint the picture of multi-generational households.

I suddenly saw that we could cross what we had in the family trees with what the spread sheet on house numbers revealed.

I did not know how to connect Esra and Meite Holdengraber to the larger tree. They appear as some of the older Suceava Holdengrabers, most of whom turn out to be the children of Solomon and Judes, but nothing in the records suggested that for them.

I knew from the death record for Solomon – listed there as Schloime when he died in Suceava on June 21, 1865 at 60 years old – that he died in house number 443.

When I ran the full spreadsheet, I found that Esra and Meite lived at the same address, giving birth to three children between 1874 and 1878.

In other words, it seemed likely that Solomon (and presumably Judes) had been living with Esra and Meite as part of a three-generation household.

Given that, it suddenly seemed likely that Esra was a son of Solomon and Judes.

None of the earlier records said that, but that might be explained by the fact that Esra seems one of the first of the third-generation Holdengrabers. The later we get, the fuller the records become.

More than that, it made sense: it’s likely that Esra, as one of the oldest children of Solomon and Judes, would have been established enough to accept his parents into his home. Or, conversely, that he’d have stayed in his childhood home and established a career as his younger siblings moved out.

Either way, it suggested the story that the aging Solomon and Judes had found themselves living side by side with Esra, and that seems sufficient to argue that he must have been their child even though none of the records explicitly identify him as such.

After Solomon died, Judes moved to be with her daughter Freida in house number 482 where she died eight years later.

That turned out to be only one example. With half of the records suddenly revealing yet more information – with a greater sense of who was living with whom even when the records didn’t show a relationship – it suddenly became possible to make educated guesses about dozens of connections that had originally been mysterious.

With what we know from the way families lived in their distinct households, it’s suddenly possible to narrow that. I still have a couple dead ends at the third generation – individuals whom I can’t find a plausible way to connect to the second and, yes, first generation – but that’s down to two or three.

Thanks to the evidence of the different Holdengraber households, almost the entire picture came into view.